The Municipal Primary Election is over.  I secured a spot on the ballot for the General Election in the Fall and I am back!  And wow, do I have a lot of catching up to do!  While I was in the middle of my campaign I tried to focus on the campaign and the issues I needed to address as a School Board Director candidate and not let the noise of national and state events seep in too much.  Don’t get me wrong.  I was well aware of current events.  I just didn’t let those events sidetrack me from my focus on my campaign.  Consequently, I have a rather large backlog of articles and position papers to digest.

I have really missed writing and have been wanting to get a post out, so rather than waiting until I had waded through all that material to write something, I thought I would write a post letting readers know what I plan to focus on over the next few months–childhood hunger and poverty.  I have chosen this focus, because I know this topic surfaces several times in my stack of reading, including articles concerning lunch shaming and proposed cuts to the National School Lunch Program.  I am also interested in understanding how the proposed budget cuts and other proposed changes to social safety net programs will impact children.  Childhood hunger and poverty will not be the only topic about which I write.  I will continue to write about other timely topics as they arise, but I will delve deeper into the topic of childhood hunger and poverty, to try and understand how poverty and hunger affects young children as they grow and learn and the consequences these effects have on our society as a whole.

As a nation we debate the reasons people are in poverty and the proper steps to take to address poverty.  Done civilly and with a willingness to compromise, I believe this debate is healthy and necessary.   Child hunger and poverty, however, is a topic about which there is very little debate.  Despite what one may feel are the causes of poverty or the best way to address poverty, few Americans believe that a child in poverty, who is hungry, is responsible for the situation he or she is in.  I know childhood hunger and poverty is a depressing topic that can weigh heavily on one’s heart.  I will do my best to temper the heavyheartedness with as many reports of hopefulness as I can find and when possible the playfulness of 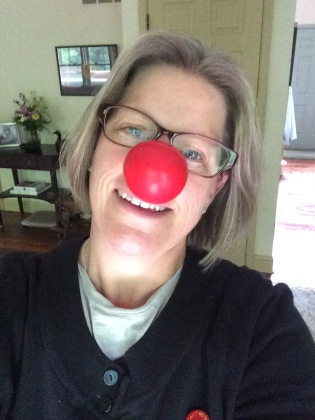 This is one of those times I can include the playfulness of a child.  Tomorrow, May 25th, is Red Nose Day.  Walgreens is partnering with Comic Relief, Inc. to raise money for and awareness of childhood poverty.   In addition to raising money through donations, cycling events, and purchases of Red Nose merchandise, NBC will host a night of special programming on May 25th to highlight some of the programs sponsored by Red Nose Day and offer viewers a chance to support Red Nose Day by calling in to make a donation.  So if you haven’t already gotten your red nose, stop in to Walgreens to pick one up and “noses on to help end child poverty”.