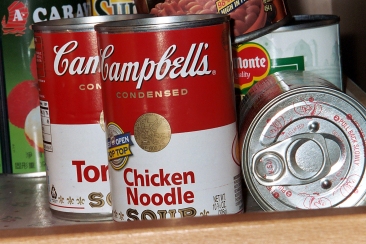 Tuesday my co-volunteer and I played “Would You Eat That Cold?” which is what we ask each other when we have to pack food for a homeless person who has no way of heating their food.  This week we also played the companion games, “Is This Too Heavy to Carry?” and ” How Long Do You Think This Can Last Unrefrigerated?” These companion games were necessary because the homeless gentleman we were assisting was without transportation and could only take what he could carry.  In addition, he lacked a refrigerator, cooler, or any other way to keep his food cold.  As games go, these are not a very fun.  This is the second time we have had to play them this month and at least the third time this year.  Each time we have played them, it has been with a different person.

Although this gentleman was new to me, he was not unfamiliar to my co-volunteer, who has been volunteering at the food pantry longer than I have.  This is the first time he has come to us homeless, however.  His experience tugged at our heartstrings.  He had been on the right path.  He attended college for three years, but left his education to care for his mother who was suffering from cancer.  As an only child, he was the only one she had.  He cared for her for a year and a half until she passed.  My co-volunteer characterized this man as an intelligent, engaging person, a caring father and loving son.  Unfortunately, in recent years he has been unable to find permanent employment and has chosen to trust people who have taken advantage of his generosity.  So now he finds himself homeless.  We gave him what we could, making sure the box wasn’t too heavy, and sent him to get some help with shelter.  Hopefully he will find a better housing situation and we will see him back in a few weeks to get a more regular allotment of food.

poverty, which is defined as a period of being poor caused by situational factors like job loss, illness, divorce or natural disaster.  While he may not have had many extras as a child and young adult, he did not live in poverty; however, due to situational factors like having to take care of his mother during her illness and current difficulty finding employment, he now finds himself homeless and living in poverty.  If he could receive the necessary temporary assistance and find a permanent full time job that paid a living wage, so that he could begin to build a financial cushion, the likelihood exists that he would lift himself out of poverty.