This past Monday I had the opportunity to attend an anti-hunger conference, entitled Coming Together: A Community Response to Hunger, sponsored by the Food Bank of Delaware in partnership with Brae’s Brown Bags and the Food Research and Action Center (FRAC).  The organizers of this conference took an interesting approach and invited both adults and children to attend, so in addition to all the adult attendees, about 200 students representing several Delaware school districts were in attendance as well.   The speakers included a nice mix of local and national figures.  Panel discussions included speakers from the state government, state and federal governmental agencies, the American Academy of Pediatricians, and local and national organizations working to raise awareness of and put an end to hunger.  The attendees, including the students, were given numerous opportunities to ask questions of the panelists.  I left this conference with a renewed sense of hope and optimism for the future as a result of the genuine concern and eagerness to help displayed by the attending students.  I also was reenergized to continue my journey to assist the food insecure.  Additionally, I received validation for my assertion that teaching cooking skills to those experiencing food insecurity will provide them with a necessary tool to use in their struggles against hunger.

The person who inspired me the most was 11 year old Braeden Mannering, who is responsible for Brae’s Brown Bags.  In 2013 Braeden attended the Kids’ State Dinner in Washington, D.C.  This luncheon was also attended by First Lady, Michelle Obama, who asked Braeden how he was going to “pay it forward.”  He didn’t have an answer for her that day, but out of his search for an answer to that question Brae’s Brown Bags was born.  Through his 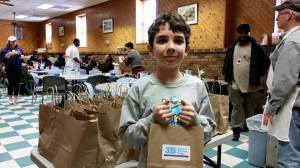 foundation Braeden distributes brown bags, containing a water bottle, 3 healthy snacks, and a brochure listing contact information for shelters and other aid organizations, to homeless people in the area.  To date Brae’s Brown Bags has delivered over 3,000 bags to those in need.  He hopes to include specialty items, like toiletries, gloves in the winter and books for children, in the future.  It was inspiring to see what could be accomplished by a single person with an idea and the will to see that idea realized.

Not only was I impressed with Braeden, but with all the young people who attended.  One panel discussion was geared specifically for them.  Two State Senators and the Committee Chairman of the DE GOP sat on a panel and answered questions posed only by students.  The students asked well thought out questions on topics including what they could do to best help those who are hungry or whether the legislators would support certain items, like locating a food pantry in every Delaware high school.  Perhaps the bravest question came from a young lady who asked what help and advice they would offer to her and her family.  She stated that even though her mother works 7 days a week, it still isn’t enough to keep them from being hungry.  She completed her question with composure, but broke down after returning to her seat.  The legislators were visibly moved, as was everyone in the room.  It is easy to talk about hunger abstractly, but much harder when you can put a face on it and that face is standing in front of you.

Numerous topics concerning hunger and food insecurity were discussed during the course of the conference, but a considerable amount of time was given to the discussion of childhood nutrition, probably due to the upcoming opportunity to enact a child nutrition reauthorization bill.  On the topic of childhood nutrition, panelists discussed school lunch and breakfast programs, afterschool and summer nutrition programs and the Special Supplemental Nutrition Program for Women, Infants and Children (WIC).  Additionally, Dr. Sandra Hassink, President of the American Academy of Pediatrics, spoke about the medical implications of poor childhood nutrition.  She remarked that this is the first time in our history that we have both an obesity epidemic and significant incidence of food insecurity occurring at the same time, with the distinct possibility that people could be experiencing both problems.  Dr. Hassink also stated that it is impossible to eat healthy if you do not know how to cook and rely on prepackaged, processed foods for your meals.

Dr. Hassink’s comment about cooking wasn’t the only time that topic was brought up during the conference.  Other speakers and attendees mentioned either the importance of cooking from scratch or the unfortunate loss of knowledge in how to cook from scratch while discussing the importance of good nutrition or the task of helping people with limited resources stretch those resources.  Additionally, the importance of cooking from scratch was discussed at the table at which I was sitting.  Joining me at the table was a registered dietician from Nemours and  a group of women from the University of Delaware Cooperative Extension who staff the Expanded Food and Nutrition Education Program (EFNEP).  This program provides nutrition, cooking and budgeting information to residents of DE who qualify for SNAP, WIC, Head Start or free or reduced school meals.  After listening to all the discussion about the importance of cooking from scratch, I believe now more than ever that my concern over the loss of cooking skills is well founded and warrants further exploration into ideas to help people learn cooking and other related skills to stretch their food dollars and eat healthier.