A group of alumni from my elementary school have been planning a reunion for all former students of this school.  The school is no longer open, but when I attended it housed grades 1-4, one classroom for each grade.  When my dad attended that same school it housed grades 1-8, with two grades per classroom, so as you can imagine the school was a small tight-knit community.  Sadly, I will not be able to attend the reunion, but being included in the Facebook discussion about the reunion and memories of our little school and community has caused me to do a bit of reminiscing myself.  Once we completed fourth grade and my class continued on to the much bigger middle school, I had fewer and fewer classes with many of my former classmates, and I lost track of many of them as the years passed.

As my mind flipped through snapshots of memories from that little school one of the memories I recalled involved a classmate named Dennis.  Dennis lived about a mile down the road from me and rode my bus.  We lived in the country and the bus stopped for most children right in front of their houses, but Dennis lived in a small grouping of houses.  Several kids got on the bus at Dennis’ stop, so I was never sure which house belonged to his family.  The community in which Dennis lived was called The Hole.  Everyone called it 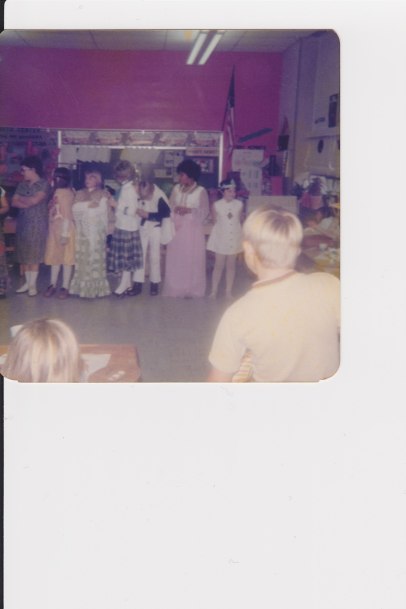 that, including the people who lived there.  It is still called that today.  Back in elementary school, my little person’s mind assumed it was called that because a large pit existed somewhere back in this wooded enclave of homes.

When I was in the third grade I accompanied a classmate and her mother down the dirt road into The Hole to drop off some things to someone who lived there.  It was during that trip that I realized my assumption about the reason for the name of this community was very wrong.  As I looked out the car window I saw what I at first took as shelters for animals, ramshackle buildings with corrugated tin roofs, patched together sometimes with what looked like only plywood.  They looked as if a strong wind might knock them over and that they would be unable to keep out the cold in the winter.  The buildings were not painted and there was no grass to be found.  It was only when someone exited one of the buildings that I realized they were houses, and in one of these houses Dennis lived.

I remember feeling a jumble of emotions, probably more than my young mind could process, and being left confused and sad that people, including my classmate, had to live in such conditions.  As I thought about what Dennis’ life outside of school might be like, I remember thinking that his home life might explain why he often acted out in school.   That day I also realized that The Hole wasn’t called The Hole because it was located near an old quarry.  While I may not have completely understood at the time, I grew to understand that the name of this grouping of houses where families lived was a metaphor for the struggle these families, including this eight year old boy, living in generational poverty had to face on a daily basis.  For him and anyone else living there to succeed in life, they first had to climb out of the hole.

The type of poverty Dennis experienced, generational, has marked differences from the situational poverty experienced by the homeless gentleman from last week’s post.  Generational poverty persists over two or more generations and people who experience this type of poverty often lack a belief that life can ever be better.  No one around Dennis probably thought their life, or his, could get better.  Consequently, Dennis in all likelihood was not urged to do well in school and he probably received little encouragement to strive for a better life.  I do not know what became of Dennis, but I have my guesses, none of which are good.

As I continue to research on these two main types of poverty, I am beginning to comprehend that the policies and programs needed to address generational poverty must be more complex, addressing more than just poverty.  To successfully attempt to alleviate this type of poverty, people’s mindset must be changed.  Those experiencing generational poverty must be given hope that their lives can get better and reason to believe that working toward a better life can reap rewards.  The change in mindset does not just need to happen with those experiencing generational poverty, however.  The whole of society needs to come to the realization that social justice does not exist in the United States.  The playing field is not level.  Until the whole of society accepts that truth and chooses to work to rectify the inequity we all suffer as a nation.